Vitamin D deficiency has increased in the general population and is a public health issue. Vitamin D plays an important role in regulating the immune system, e.g., by modulating the production of inflammatory cytokines. In most countries, the recommended maximal daily dose of vitamin D3 is 4000 IU (100 µg) per day. In this study, we investigated whether a single vitamin D3 bolus can reduce the levels of the inflammatory markers interleukin (IL) 6, IL8 and tumor necrosis factor (TNF) within one month. Fifty healthy Saudi males were recruited from the local community in Jeddah city and were orally supplemented with a single dose of 80,000 IU vitamin D3. Serum samples were collected at time points 0, 1 and 30 days, and serum levels of IL6, IL8 and TNF, parathyroid hormone (PTH), 25-hydroxyvitamin D3 (25(OH)D3), triglycerides, cholesterol, calcium (Ca2+) and phosphate (PO4−) were determined. On average, the vitamin D3 bolus resulted in a significant increase in vitamin D status as well as in a significant decrease in the levels of inflammatory cytokines even one month after supplementation without changing serum Ca2+, PO4− or lipid levels. In conclusion, single high-dose vitamin D3 supplementation is safe for reducing inflammation markers and may lead to an update of current recommendations for vitamin D intake, in order to prevent critical health problems. 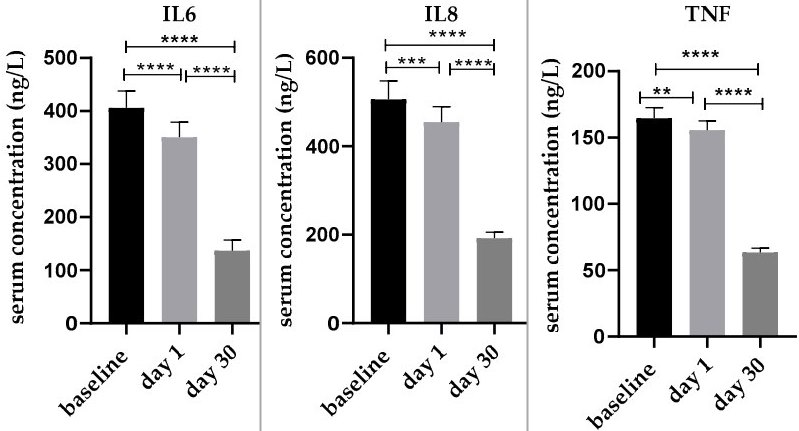 Vitamin D deficiency is a global health problem that not only leads to metabolic bone disease but also to many other illnesses, most of which are associated with chronic inflammation. Thus, our aim was to investigate the safety and effectiveness of a single high dose of vitamin D3 (80,000 IU) on vitamin D status and proinflammatory cytokines such as interleukin (IL)6, IL8 and tumor necrosis factor (TNF) in healthy Saudi females. Fifty healthy females were recruited and orally supplemented with a single vitamin D3 bolus (80,000 IU). All participants donated fasting blood samples at baseline, one day and thirty days after supplementation. Serum 25-hydroxyvitamin D3 (25(OH)D3 ), IL6, IL8, TNF, calcium, phosphate, parathyroid hormone (PTH) and blood lipid levels were determined. Serum 25(OH)D3 significantly increased one and thirty days after supplementation when compared with baseline without causing elevation in calcium or phosphate or a decrease in PTH to abnormal levels. In contrast, the concentrations of the three representative proinflammatory cytokines decreased gradually until the end of the study period. In conclusion, a single high dose (80,000 IU) is effective in improving serum vitamin D status and reducing the concentration of the proinflammatory cytokines in a rapid and safe way in healthy females.

Vitamin D in the Context of Evolution

For at least 1.2 billion years, eukaryotes have been able to synthesize sterols and, therefore, can produce vitamin D when exposed to UV-B. Vitamin D endocrinology was established some 550 million years ago in animals, when the high-affinity nuclear receptor VDR (vitamin D receptor), transport proteins and enzymes for vitamin D metabolism evolved. This enabled vitamin D to regulate, via its target genes, physiological process, the first of which were detoxification and energy metabolism. In this way, vitamin D was enabled to modulate the energy-consuming processes of the innate immune system in its fight against microbes. In the evolving adaptive immune system, vitamin D started to act as a negative regulator of growth, which prevents overboarding reactions of T cells in the context of autoimmune diseases. When, some 400 million years ago, species left the ocean and were exposed to gravitation, vitamin D endocrinology took over the additional role as a major regulator of calcium homeostasis, being important for a stable skeleton. Homo sapiens evolved approximately 300,000 years ago in East Africa and had adapted vitamin D endocrinology to the intensive exposure of the equatorial sun. However, when some 75,000 years ago, when anatomically modern humans started to populate all continents, they also reached regions with seasonally low or no UV-B, i.e., and under these conditions vitamin D became a vitamin. 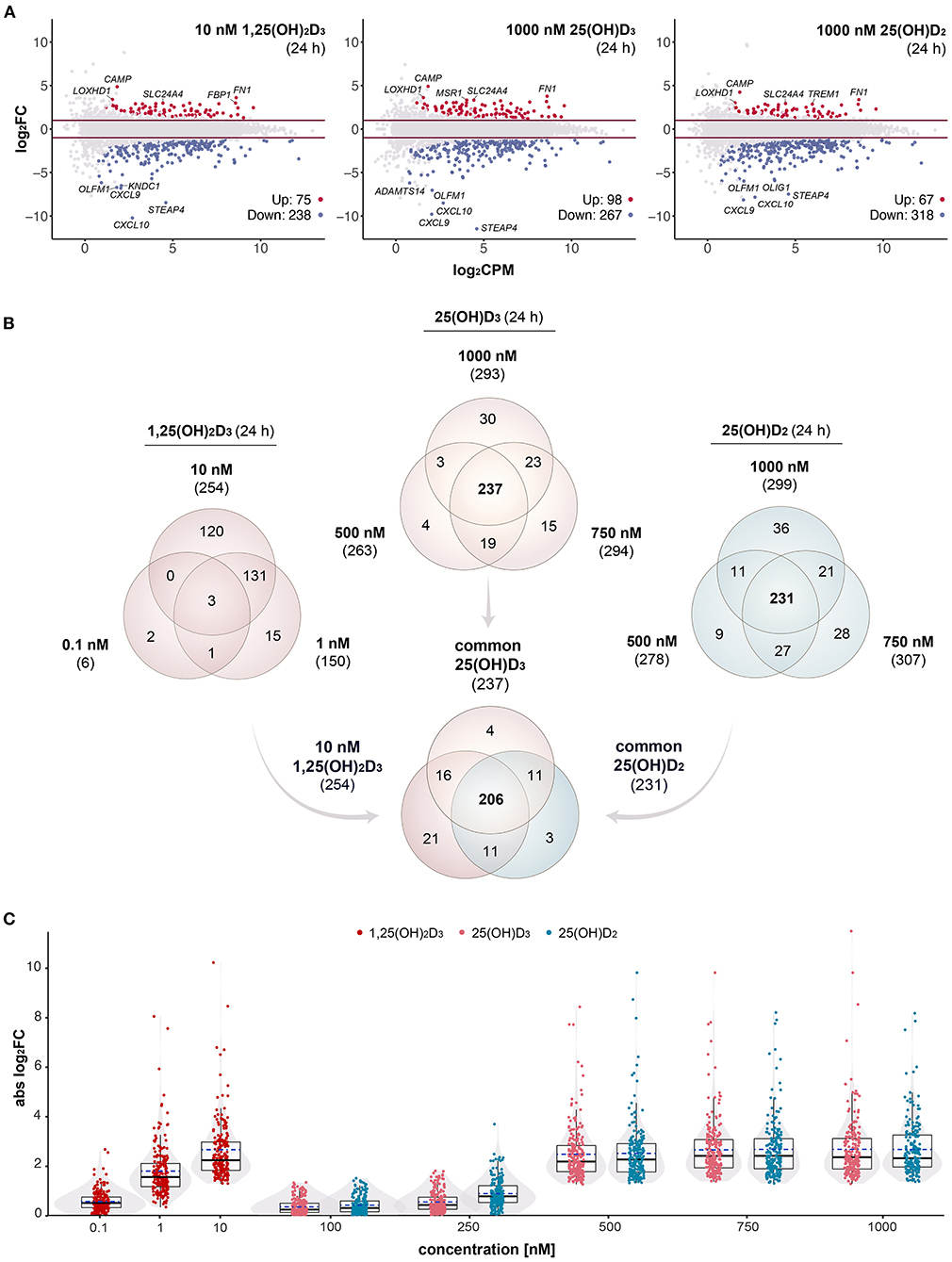 Human peripheral blood mononuclear cells (PBMCs) represent a highly responsive primary tissue that is composed of innate and adaptive immune cells. In this study, we compared modulation of the transcriptome of PBMCs by the vitamin D metabolites 25-hydroxyvitamin D3 (25(OH)D3), 25(OH)D2 and 1α,25-dihydroxyvitamin D3 (1,25(OH)2D3). Saturating concentrations of 1,25(OH)2D3, 25(OH)D3 and 25(OH)D2 resulted after 24 h stimulation in a comparable number and identity of target genes, but below 250 nM 25(OH)D3 and 25(OH)D2 were largely insufficient to affect the transcriptome. The average EC50 values of 206 common target genes were 322 nM for 25(OH)D3 and 295 nM for 25(OH)D2 being some 600-fold higher than 0.48 nM for 1,25(OH)2D3. The type of target gene, such as primary/secondary, direct/indirect or up-/down-regulated, had no significant effect on vitamin D metabolite sensitivity, but individual genes could be classified into high, mid and lower responders. Since the 1α-hydroxylase CYP27B1 is very low expressed in PBMCs and early (4 and 8 h) transcriptome responses to 25(OH)D3 and 25(OH)D2 were as prominent as to 1,25(OH)2D3, both vitamin D metabolites may directly control gene expression. In conclusion, at supra-physiological concentrations 25(OH)D3 and 25(OH)D2 are equally potent in modulating the transcriptome of PBMCs possibly by directly activating the vitamin D receptor.